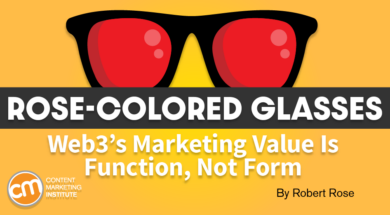 Picture a time when a new technology angered many because of the copyright infringement risk to creators, yet people considered technology and media company leaders heroic.

A new technology protocol prompted an entire version number upgrade to the web. A new technology challenged Google for search supremacy. And every startup name contained fewer and fewer vowels.

That last hint might make you think I’m describing this moment. But I’m talking about the period from 2007 to 2009. At that time, Google was digitizing the world’s books (and facing lawsuits for it).  Kevin Rose of the social network Digg, Eric Schmidt of Google, Steve Jobs of Apple, Pete Cashmore of Mashable, and Mark Zuckerberg of (well, you know) were lauded as web celebrities.

A new technology protocol called “web services” that seamlessly connected data and applications across the internet was all the buzz. Microsoft branded it “.NET.” Magazines, journals, and entire startups were built around it. A new search engine called Cuil (pronounced “cool” – yes, really) launched and faded quickly. And, all startups started “dis-emvoweling” (I couldn’t resist) – Flickr, Tumblr, Grindr, Scribd, and Twttr (later known as Twitter).

When I was CMO of a startup in 2004, we had a running joke that just dropping a couple of vowels from our name would add a zero to our valuation in the next funding round.

So, yeah, at the beginning of 2023, things feel eerily similar. Just swap .NET for Web3.

The #Web3 conversation in 2023 feels similar to the discussion of Web 2.0 15 years ago, says @Robert_Rose via @CMIContent. Click To Tweet

What a difference a year makes.

At this point in 2022, Facebook had rebranded itself as Meta and promised to make the metaverse a thing. NFTs (non-fungible tokens) attracted headlines and eye-popping sales figures. And everyone tried to understand what it would all mean to their marketing strategy.

Back then, I discussed how Web3 technologies like NFTs and the metaverse were ultimately content plays. I suggested marketing departments would be most likely to explore these new developments.

Today, some active experiments continue. But their most interesting aspect might be how few Web3 buzzwords they use:

While some marketers are experimenting with these Web3 technologies, the initial buzzwords are losing their hype.

Consumers are skeptical about words like NFTs and metaverse. Trading volumes for NFT art collections are down 94% from their spring 2022 peak. Meta’s stock has dropped some 60% since the company changed its name in October 2021.

Does it even make sense to invest in these new kinds of content and marketing programs now that the bright, shiny newness has dimmed?

Maybe, if you swap Web3 glitz for utility

The overriding goal of content marketing – as I’ve preached for over a decade – is driving value to your audiences through content experiences. It’s the content marketing mission: To consistently deliver relevant and valuable content (experiences) to attract and retain audience members who ultimately convert to customers.

At the recently concluded Consumer Electronics Show (CES), Raja Rajamannar, chief marketing officer of Mastercard, spoke about several marketing plans for 2023. The company just launched the Web3 Artist Accelerator program to “teach both artists and fans how to build (and own) their brand” in what the company calls “the new digital economy.” The program uses blockchain technology (that’s what makes it a Web3 play). But its utility is that it offers a new way to achieve older goals – providing artists with fractional ownership of co-created work to fund musical projects and creating a community with fans.

Over the last year, I’ve advised more clients to experiment with content and technologies around Web3. I’ve encouraged them to think of Web3 as a way to provide a functional utility that drives value for the audience. In other words, look beyond speculative investments in collectibles or offering virtual places to visit.

Put simply: In 2023, the most interesting investments will use NFTs and the metaverse as a vehicle to deliver something valuable rather than as valuable things themselves.

Think of #Web3 technologies in terms of how to provide value for your customers and audience, not as a speculative investment in a collectible, says @Robert_Rose via @CMIContent. Click To Tweet

I’ve had to learn this lesson again and again (I’m sure I’m not alone): Audiences and customers don’t care about technology, buzzwords, or the lack of vowels in a company’s name. They care about what they can do or who they will be with your product or service that they can’t do or be now.

In the early 2000s, the chatter about the internet’s next generation centered on the formation of content, commerce, and community. Web 2.0 was to enable all of that.

As the old saying attributed to Mark Twain goes, “History doesn’t repeat itself, but it does rhyme.” The chatter around Web3 again focused on those elements. The difference is who creates the content, what the customers buy, and where the community exists.

So, yes, Web3 technology is alive and well in 2023, and marketing leaders should pay attention. If you can figure out a way to use it to create value for your audience (and, through them, your brand), then try it.

As a marketer, I’m excited to see how people create value with Web3 technologies. My prediction is that those who succeed won’t need any buzzwords.

It’s your story. Tell it well.

Subscribe to workday or weekly CMI emails to get Rose-Colored Glasses in your inbox each week.